In the 1986 revision of NFPA 1971, Protective Clothing for Structural Fire Fighting, a new test method for measuring thermal protection was introduced and a minimum thermal protective performance (TPP) rating was established.

This sophisticated test method replaced the requirement for a minimum composite thickness, and its purpose is to measure the rate at which convective and radiant heat penetrate through the composite system – outer shell, thermal liner, and moisture barrier – to cause second-degree burns to the human skin. 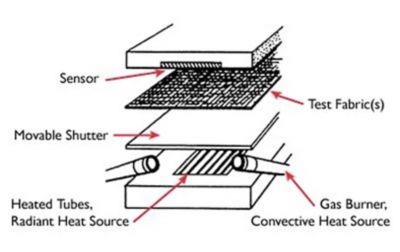 This illustration is of a standard TPP tester. The three layers that make up the turnout ensemble are placed in composite form beneath the sensor, which records skin temperature. These layers are placed onto the machine in the same order in which they are found in the protective system, with the thermal layer next to the sensor, the moisture barrier in the middle, and the outer shell next to the energy source.

The movable shutter enables the technician to control the time and the amount of exposure, during which gas burners provide actual flame. At the same time, the heated tubes provide radiant heat and a flashover situation can be simulated.

The point at which heat transfer through all three layers is enough to cause a second-degree burn is determined graphically, by using a recorder chart of the sensor readings. During testing, the recording continuously traces the average temperature rise on paper, which is depicted as a curved line representing higher and higher temperatures as more heat penetrates through the sample materials to the sensor.

As the test is being run, the tracing is compared with a second curve, called the Stoll's curve, which shows the blister point of human skin as a function of heat and time. The point of intersection between these two curves is the actual TPP rating. For the purpose of measuring actual time to burn, the TPP rating is divided in half to determine the number of seconds until human tissue reaches the second-degree burn point. Thus, the NFPA minimum requirement of a TPP rating of 35 equates to 17 ½ seconds until second-degree burns occur in a flashover situation. 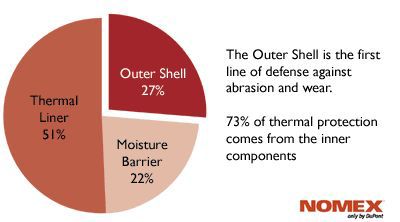 It is important to remember that the TPP rating is dependent upon the component materials specified and is not an independent function.

To illustrate this point, imagine that fabrics are actually numbers and that you order an outer shell with a rating of 5, a thermal liner valued at 3, and a moisture barrier rated at 2 – and specify that the combination must total 12. By totaling the numbers (i.e., materials) you ordered, we can only come up with a 10, not a 12, regardless of how hard we try! To reach the 12, it would be necessary to make a change to the materials specified.

Since materials are not numbers, there will always be some variation in the measurements. For example, in any textile industry there are tolerances for the weights of fabrics; specific to the NFPA 1971 standard, there is no weight requirement for any of the three layers. Instead, the standard sets minimum performance requirements, and as long as the individual layers meet all of the performance requisites, weight is not a consideration.

We do want to point out, however, that because material weights do vary, it is possible for the same combination to yield different TPP ratings from test to test. For example, if the 7.5 oz. PBI® shell fabric is running slightly higher (say 7.8) and the 7.2 oz. ARALITE® and the 4.0 oz. GORE® RT7100 are also on the heavier side (say 7.4 and 4.3 respectively), then your total TPP test rating will be higher on that particular composite test.

For this reason, we caution our customers to take all of the NFPA requirements into consideration when making choices, and to not hone in on this one value. In general, we actually prefer to provide a range; however, the standard only dictates a minimum rating of 35 and so the third-party test result is reported as an average, yielding only one number. Since many manufacturers have their own TPP test apparatus, and since the same combinations can yield different results, we encourage departments to request that any values provided come from specific UL certification results.

Learn more about Variability in TPP and THL Results

The Trade-off Between TPP and THL

A popular misconception is that if 35 is good, a rating of 40, 50, or even 60 must be better. It is important to remember, however, that the only way to increase your TPP rating is to add more insulation, usually by specifying heavier material components. Generally speaking, added insulation will mean increased weight of the total system, resulting in greater heat stress for the firefighter and lower total heat loss of the composite. The question you must ask yourself is whether the added seconds of protection in the event of a flashover environment is really a good trade-off against today's lighter weight systems and higher THL values. It is also important to note that by selecting the three layers to be used in your system, you have automatically specified the TPP rating, since it is a function of the materials chosen and is not a product of garment design or construction.

Learn more about TPP vs THL 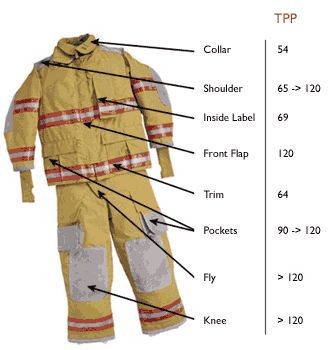