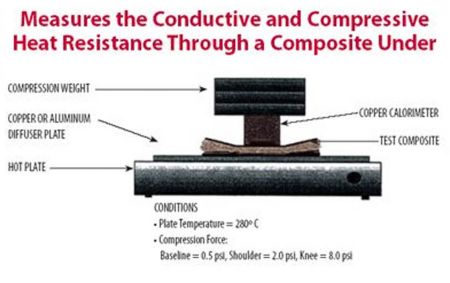 As originally written, the CCHR rating was the time in seconds to achieve a temperature rise of 24°C. The minimum requirement established in the 2000 edition was 13.5 seconds, which was arrived at by testing a garment with a TPP of 35 on a hot plate set at 280°C, under a pressure of 1⁄2 lb. per square inch.

The shoulder area is tested under 2 psi, which simulates a firefighter wearing a 2" SCBA strap, with a 40 lb. fully loaded tank. The knee section is tested at 8 psi, which represents the amount of force that a 180 lb. firefighter would exert to the knee area when in the kneeling position. In the 2007 edition of NFPA 1971, the CCHR requirement increased to 25 seconds.

The requirement did necessitate additional insulation in some systems, depending upon which materials were used in the base garment. Globe made the decision to automatically add a second layer of thermal liner in these high-compression areas, to ensure that minimum requirements were always exceeded. The standard requires that the CCHR reinforcements measure a minimum of 100 mm (4") along the crown of the shoulder and extend down from the crown on both the front and back of the garment at least 50 mm (2"). The knee areas must measure a minimum of 150 mm x 150 mm (6" x 6"). The Globe shoulder reinforcements always extend full length along the shoulder crown and 125 mm (5") down the front and, depending upon the model chosen, extend from 55 mm (2") in the back to as much as 175 mm (7") in the back.

For the knee area, we install not just a layer of thermal liner, but also an additional layer of moisture barrier, for a level of protection far and above the minimum requirement.

The Globe CCHR reinforcements are always cut from the exact thermal and moisture barrier fabric as was required in the department specification and are always overedged. Although not required by the standard, this overedging finishes the raw outer edges so that the materials do not ravel and degrade in laundering.